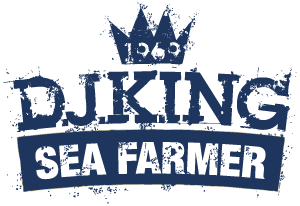 Like many commercial fishermen in Connecticut and elsewhere, DJ King of Branford has had to reinvent himself several times over the last five decades or so. It wasn’t necessarily his choice, but his necessity.

A graduate of Clark University who studied economics and geography, DJ, (aka Donald King), began lobstering and fishing on Long Island Sound in 1969 at the age of 10. Over time, his career path has also included earning a 50 ton captain’s license, captaining clam and oyster boats, farming oysters and bay scallops, and finally – so far – growing seaweed. He is the owner/operator of King Lobsters and Montowese Bay Oysters. DJ is also an appointed member of the Connecticut Seafood Council.

When Pots were Wood and Men were Steel

DJ’s back and arms achingly remember the weight of heavily fouled wooden lobster pots – a time he says was “when pots were wood and men were steel.” Like other lobstermen, he switched from using wooden pots to wire traps, which stacked more easily and lasted longer. Lobstering was good in the Sound, particularly in the 1980s and 1990s. Around 1998, it hit its peak, when about 400 active Connecticut lobstermen fishing upwards of 125,000 pots landed nearly 4 million pounds of lobster. At that time, the 10 square mile area around Branford, where DJ lives and works, supported 24 full-time lobstermen fishing 27,000 pots. A great day’s catch exceeded 1,500 pounds of these tasty crustaceans. Today, this same area barely supports three part-time lobstermen.

In 1999, the lobster resource in Long Island Sound suffered a disaster brought on by environmental conditions unfavorable to this crustacean, a disease previously unknown to affect lobsters, and—if you ask any lobsterman—the pesticides used to treat mosquitoes carrying West Nile Virus. The lobster population plummeted from an all-time high over the next few years, and then continued to decline over subsequent years. While some lobsters are still being landed in Connecticut—just over 241,000 pounds in 2012—there remains no recovery in sight. The number of active lobstermen in Connecticut followed a similar trajectory as the landings, as they first hoped for, then prayed for, and then pleaded for, a population recovery. It’s not the purpose of this article to get into the causes of the die-off, or the conservation measures, regulation changes and lawsuits that followed. Suffice to say, both the Long Island Sound lobster resource and the lobstermen who earned their livelihoods harvesting them have never been the same. In DJ’s words, both the lobsters and the lobstermen have become endangered species.

DJ’s new mantra became diversification or bust. He wasn’t alone in this – it’s a common trait of fishermen who must ride out the highs and lows of fishery populations and the concomitant changes in management and conservation measures. However, not all were successful with diversification, and many left the lobster fishery and the water altogether. Others turned to other types of fishing, or conching – using wooden pots to catch the large sea snails (whelks) used for the dish, scungilli. Leasing oyster and clam beds became yet another avenue by which displaced lobstermen could remain working on the water.

Today, instead of lobster pots in the water, DJ has built a shellfish upweller at his home and is raising bay scallops and oysters in cages on his leased grounds. Some of his idle lobster pots are being used to house shellfish bags, keeping the young oysters and scallops up in the water column, off the bottom where they might get silted, and away from predators. “Scallops are harder to grow than oysters”, says DJ. “Now I am trying to overwinter them in deeper water than I have in the past”. He adds, “As for oysters, I found one-inch oysters that survived out of the water for four hours at 7 oF while inside the bags or cages. As the temperature drops, the bags and cages develop a layer of ice that becomes thicker until the cage becomes encased in ice and eventually a solid block of ice. This insulates the oysters from the severe cold.”

A snapshot of the deck of his boat, the Kory/Alexander yields evidence of this diversification. Stacked on the deck are wire lobster pots, wooden and wire conch pots, and gill net. Recently DJ added longlines to his complement of gear – for the growing of seaweed.

Seaweed is the new local veggie in Connecticut

In 2012, Bren Smith of Thimble Island Oyster Company in Branford harvested and sold the first permitted commercial harvest of the brown seaweed known as sugar kelp from Long Island Sound (see Wrack Lines issue…). In 2013, DJ became the second person in Connecticut to apply for and be permitted to raise seaweed or sea vegetables on longlines in Connecticut waters. He installed and seeded several longlines with sugar kelp with the assistance of Dr. Charles Yarish and Dr. Jang Kim of UConn Stamford, whose research, supported largely by Connecticut Sea Grant, led to the development of the technologies to culture several species of native seaweeds. DJ also experimented with growing the red seaweed, Graciliaria, on longlines in the fall of 2013. In contrast to the kelp which is a winter crop, Graciliaria is a summer crop – which offers those interested in growing seaweed for food seasonally-different options. Connecticut Sea Grant, the Connecticut Department of Agriculture, Bureau of Aquaculture, Yarish, Kim, and others are working together to gather the data needed for the Bureau, and the Connecticut Departments of Consumer Protection and Public Health to approve longline harvest of Graciliaria for the sea vegetable market in the near future.

As DJ sees it, “The lobster may never flourish again in Long Island Sound, therefore it’s necessary to pursue other viable options. Sea farming may be our ticket to future success.” Fishermen like DJ will help determine that.